Benny was my first pit bull…the one who made me fall in love with the breed! Even now, I can’t believe I am writing this in past tense, as I still have trouble believing he is gone. He was my heart dog, my best friend, my protector – for 13.5 years…until Sept. 19, 2016. That is the day he lost an 18-month battle with cancer. But this is not about Benny’s death. This is about his life and what he accomplished, even after being diagnosed with cancer and given roughly 2-3 months to live. Benny was a survivor.

I never planned on having a show or performance dog when I got him…just a family pet. And since it was just me at the time, I guess, just a buddy. I still remember going with my aunt to get him for the first time. I saved the newspaper clipping with the ad that led me to find him nearly a decade-and-a-half ago. In fact, I came across it just the other day when going through Benny’s records. I also noticed some notes that I didn’t remember reading before. The breeder had made comments about the litter on his web site, and I had saved copies of those pages, as well. I never knew that Benny was not the breeder’s top one or two picks from the litter, or even his third or fourth choice…because he was my top pick from the moment I saw him.

At the breeder’s that day, I remember giving the pretense of trying to decide between the two little pups who both had white heads: the female with the all-white head (who the breeder said was the alpha) and the male with the white head and brown patch over his eye, who turned out to Benny. The puppy with the patch just melted me! But, since I have always been the type who likes to carefully mull over choices and to have choices to mull over…I gave a concerted effort at studying the behavior and appearance of each puppy in the litter - particularly these two pups, who were the finalists after narrowing down my choices. But I knew right away that the little pup with the patch was who I had my heart set on. Not only did I love his appearance, but he seemed to have a good attitude and abstained from fights when goaded by the little alpha female during my visit that day. When she came at him on two occasions barking, growling and lunging in her puppy dominance play, he ignored her at first…and then, the second time, he responded by letting out one or two quick barks, then abruptly turning and walking away to play with a toy laying under the back steps. That was a precursor to the laid back adult dog that Benny would become.

I remember being surprised when the breeder told me a short while after getting Benny that I could show him in the conformation ring if I had interest, and that he would help if I needed it, getting started. Back then, I thought showing dogs was only something other people did. And I had no idea that many of the dog sports Benny and I would later be introduced to even existed.

I also did not know that Benny was apparently somewhat smaller in size, compared to other dogs of his breed. But after we got into the dog show circuit, my aunt (who went with me and Benny to most of the shows) told me that another spectator - who was seated next to her and who apparently did not know she was with me – pointed Benny out in the ring and commented, “Well, that little guy doesn’t stand a chance – in there with all those bigger dogs.”

And I still remember a dog show friend/acquaintance of mine telling me as we traveled to a show together one time where I would be showing Benny, that I should get a “good dog…one who will win every time in the ring.” She suggested a well-known breeder who I should look to for my next dog. Incidentally, the following weekend, my Benny took Best of Breed in the show ring over that very same breeder’s dog. Maybe I subconsciously go for the underdog at times, and Benny somehow seemed to pull off a miracle and prove these people wrong. Maybe he did it for me, for believing in him. For whatever reason, Benny seemed to pull off miracle after miracle – particularly in the last few years of his life.

Benny never had a day of training of any kind until he was around 6.5 years old. When I married my husband, he insisted that all dogs in our household have basic obedience training. So, we unknowingly began what turned out to be one incredible journey! We liked the results we saw in our dogs from training, so we continued. And after about 3 years of going to classes, we decided to try competing. We got more serious about our training and set out with the goal of earning an obedience title. Benny was nearly 10 years old when we began competing. And up until then, the only competition he had been involved in was the conformation show ring, where he had earned a champion title.

We started out with obedience competitions, then expanded our training and trialing repertoire to eventually include titles in: rally, agility, weight pull, nose work, barn hunt, therapy dog work, canine good citizen, and temperament testing, as well as obedience and conformation titles.

When all was said and done, Benny had earned 58 titles and designations (about an even split with the American Kennel Club and the United Kennel Club) - and 56 of those titles were earned when Benny was between the ages of 10 to 13 years old - which made Benny the 2nd “Most Multi-Titled UKC Dog in the History of the Breed.” AKC does not track/provide those records.

In November 2014, at almost 12 years old, Benny became “UKC Super Dog #106.” And in June 2015, after being diagnosed with cancer and undergoing a complicated surgery, which involved prying Benny’s ribs apart to remove a 4” long cancerous tumor and a lung lobe it was attached to…just 9.5 weeks later, Benny competed at the UKC Premier and was even an “Altered Total Dog” qualifier there! Another major miracle that Benny somehow pulled off! Just surviving the surgery at his age was a miracle in itself – particularly since Benny was unconscious for more than 11 hours post-surgery and had briefly flat-lined based on the pulse oxide monitor that was connected to him. We thought we had lost him. But Benny’s recovery after that seemed to go quickly, and he always had to be included in everything we did, even then...that is what made him happy!

Later that year, came Benny’s two national breed club specialty shows, with AKC and UKC. And since I figured it would be Benny’s last opportunity to attend either, we went to both, just days apart! At the Staffordshire Terrier Club of America 2015 National Specialty, Benny was the lone recipient of the “Performance Versatility Platinum Award” (the highest level offered). And at the American Pit Bull Terrier National Specialty, Benny was co-awarded the Karen Dawes Memorial Performance Versatility Award for 2015 (with Valerie Piltz and her Phoenix). What a way to go out with a bang…such a memorable end to Benny’s career, I thought!

When I look back over the nearly decade-and-a-half that Benny and I shared together, I realize that he taught me some important lessons – including how to be a better pet parent, a better trainer, and a better person in general. Benny was brave and loyal. He was my protector always. And I respected him and found such goodness in him. I think everything we accomplished together as a team was because we had each other’s backs and each other’s hearts, fully and completely. We knew each other well and could anticipate what the other would do next. Benny was with me through some tough times, including moves across the country, just the two of us.

Benny was never what you would call a “drivey” dog. But he wanted to make me happy. Looking back, I was certainly not the best trainer or pet parent, by any means. In fact, in the beginning, I remember a few times when I would even verbally scold Benny if I felt he was not giving his best effort and had come up short in competition. Then, one day, I had the good fortune of witnessing a fellow competitor (who I greatly admire) interact with her dog immediately after his ring performance in agility. I had missed her dog’s run, but had guessed it was amazing…by the wildly enthusiastic praise that Debbie had showered upon her dog. So, I asked her how they did…fully expecting her to say they had just earned their MACH 12. In fact, Debbie and her Poodle are ranked #2 in the country and have multiple AKC Agility MACHS to their name…But just so happen, NOT on this occasion. Debbie responded, much to my surprise, that they had actually not done particularly well on that day. She went on to tell me that she praises her dog regardless of their performance. That has stayed with me.

And throughout the years, I have learned that I often make more mistakes in training and trialing than my canine partner, especially in more stressful times like competition. I have days when I don’t feel as well or as motivated…days when my thoughts are elsewhere, and at times, days when I would rather be somewhere else. Yet, in spite of all my shortcomings, my dog is still willing to work with me…and I still find encouragement from the positive praise from my fellow competitors – even when I know that I have made mistakes and not had the best performance that I was capable of. That day with Debbie, watching her interact with her dog, has forever changed my philosophy on training.

In retrospect, I feel badly that I was not the best pet mom ever to Benny early on. There were times when I spent too many hours working & he spent too many crated. But I am thankful that I improved over the course of his life, with his help as my training partner. I think Benny’s last years were much improved, and I learned more about how to better make him happy and comfortable and fulfilled.

There is a saying written by Maya Angelo - advice which moves me, and which I feel applies to my training & the relationship I had with Benny and now, to the work I do with my other dogs and my pet parenting, “Do the best you can until you know better. Then, when you know better, do better.”

Rest in peace my sweet boy, Benny! Thank you for helping me to know and do better! And bless you for so faithfully sticking by my side in the meantime! You will always have my heart... 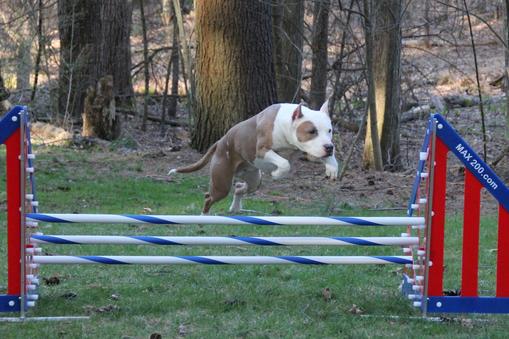 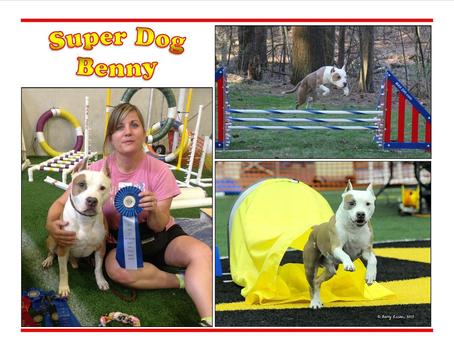