Owned, loved, and handled by

It is an honor to be included among some of the greats in the breed, by being invited into the Hall of Fame. I will start by saying, Bull was my heart dog, and a once in a lifetime dog. He fueled my competitive fire, and as a Team, we traveled coast to coast seeking to beat the best, to become the best.

Together we set records. Bull is the only APBT, and possibly of any breed, to finish in the UKC Top Ten, 7 consecutive years. Each year, he finished in the top 5. Even at 8, an age considered old for a show dog, he was consistently beating dogs half his age in the breed ring. Over his 7 year run, he collected 86 Best In Show wins, 33 Reserve Best In Show wins, 37 Total Dog Awards,4 National Award of Merits, and a Reserve Best In Show at Premier. He won Top Ten Best of Breed at Premier 4 years, and placed in the Top Ten All Breed Finals 3 years, again setting a breed record.

He also was a competitor on the Weight Pull track. With the help of his co-owner and National Champion Weight puller, Andrew Peabody, Bull racked up the titles. Andrews expertise training unleashed Bulls WP potential. Bulls biggest accomplishment was not in the show ring, nor the WP track. It was in his home. He was my best friend, and my rock, whom saved my life.... literally. The only place Bull preferred over the show ring, was with his boy. Andrew and I watched the bond with Bull and our Son form and grow, and to this day...... all 3 of us miss him. He got the nick name "SuperBull", and that he was. Thank you to all the great people who shared our record setting journey, and supported us. I told Bulls breeder when he was a puppy, that I was going to beat her record. I never gave up, neither did my partner, we were a Team. RIP Bully Boy, you made your mark. 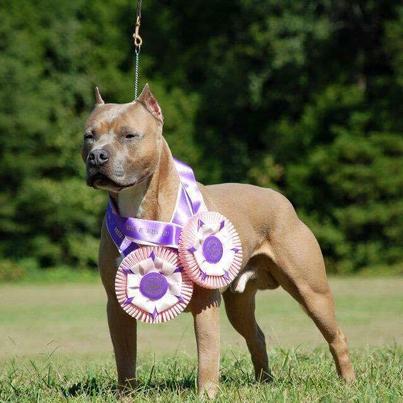